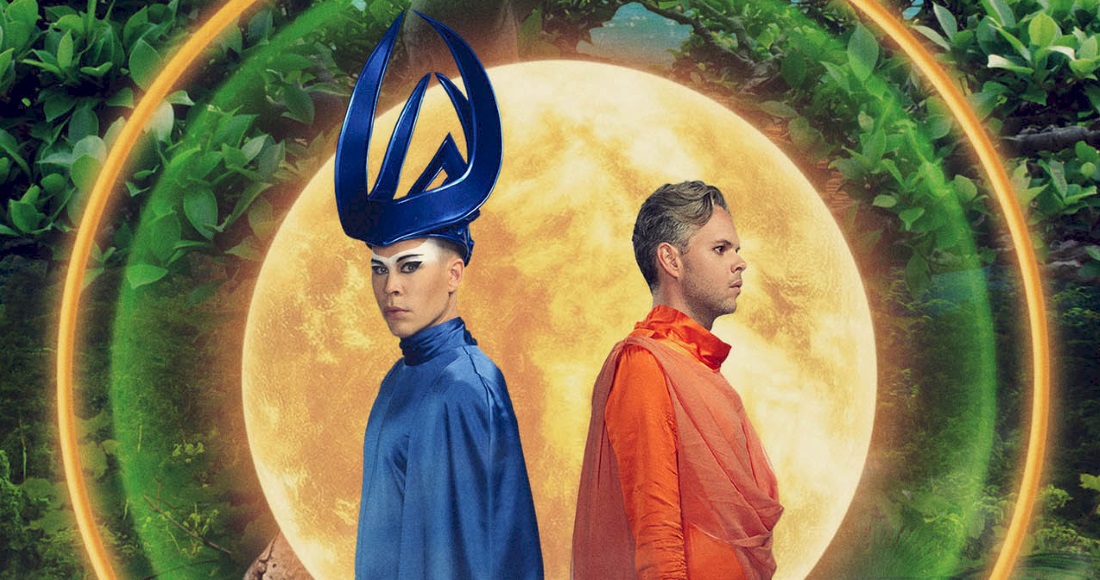 Empire of the Sun are one of pop's most intriguing, underrated gems.

Australians Luke Steele and Nick Littlemore have garnered a large cult following across the world, their Empyreans entranced by the duo's unique musical style, elaborate concepts, evocative look and captivating lyrics. Fans can get a glimpse of that magic at the group's one-off show at The Roundhouse on October 13.

Ahead of the group's third studio album, the inspirational call-to-action concept record Two Vines, we sat down with Nick to chat about the new single High and Low and its impressive video, working with Fleetwood Mac's Lindsey Buckingham and his conversations with Buddha...

Hi Nick! The Two Vines sound and imagery are everything people have come to expect from Empire of the Sun, just with a new twist. Was it important for you guys to stay close to the sound that you built your foundations on?

"We wanted to restore the warmer, more musical sound that we had on the first record. We wanted to get away from the club and EDM route and turn down the drums and turn up the music. It is important to bring the warmth out and I think we lost that a little bit on the second record.

"The sound we have always gone for is kind of a case of going back in time in order to go forward. The sound of Empire is as important as the images, the songs themselves and as the melodies. Each part is equally vital to construct this imagined world.

"A lot of the choices we make are rather sub-conscious; we do a lot of things in dream states or lucid dreaming, visionary states, enlightened states of being. A lot of the messages and things we are trying to put out come to us through an open channel if you will. We’re big believers in the cosmic consciousness, the teachings of [Indian guru Paramahansa] Yogananda, Buddha, thousands of other spiritual leaders that have taught us things over the years."

Is sticking with what the fans know a reason you have not taken lead vocal before Nick?

"I sang the demos to most of the songs but haven’t put my vocal on the record."

We believe that is about to change on Welcome to My Life, a deluxe track on the new album? Is that the only one?

"Yeah. That’s true actually. It is a little contentious because I don’t tour and to put my lead vocal on many big songs and then not play them live wouldn’t be fair."

Let’s talk about High and Low. It is quite relaxed yet euphoric, much like the lead singles Walking On A Dream and Alive that came before it. Is going for an anthemic opener opposed to a more emotional track been a deliberate decision?

"To be honest, if it was up to me, I would always pick the emotional over the euphoric. My favourite songs on any record I have made or that I’ve bought that I cherish, very rarely is it “the one” from a marketing perspective. It is more about what moves me and for the most part, those ones are the quieter ones. I don’t really subscribe to the upbeat, energetic or euphoric. I always found more joy in sadness than I did in happiness."

In the official video for High and Low, a large eye surrounded by forestry is seen blinking. What is the symbolism behind that?

"I want to clarify that because a lot of people are saying the eye is some kind of nod to the illuminati but it’s not. It’s a nod to the third eye, an awakening. I’m a big fan of the teachings of Terrence McKenna and many other people who have explored the entheogenic state and shamanic state and these kinds of things that are about love and creating love and giving love. We’re promoting that feeling of inner bliss."

The Two Vines album is all about being in touch with Mother Nature and connecting with the planet. What experiences have you had to evoke such a massive concept?

"Under the deep meditative times I have experienced over the course of the last two years, Mother Gaia has presented herself to me and talked to me in quite a casual way about the planet and about nature. I felt an overwhelming pull to come back to nature and to steer the world away from money, greed and this f**king useless stuff that people go on about.

"Along the way making this record, I had a number of visionary experiences and in fact, Buddha was revealed to me in a deep meditative state and I came back from that experience and the others wanting to share the lessons I had learned, much of which were about returning to nature."

One new thing lyrically with High and Low is the inclusion of a named character named Alice Dee. What is her significance?

"Alice Dee is a girl I knew as a teenager who was quite a wild child. Alice was a real person as well as being a metaphor; she has connotations with beer, the enlightened movement of the 1960s amongst other things!"

Are there any songs on the album that will take people to a place a previous Empire track has never taken them?

"We’re not really interested in reinventing what we do as so much as push it forward. I feel for the first time rather than just putting out good colours and shapes and magic and all that, we really want to put a positive message into the universe about people returning to their senses, about looking after the planet, urging our money hungry governments to move away from mining our precious planet.

"We need to start listening to our beautiful, indigenous cultures. There was a time when humans lived symbiotically with the planet and now we’re in a very different state of being. I want everyone to understand that is possible for us to return to a much more beautiful world. In reality, it is about all of us taking the steps to make this world a more harmonious and beautiful place.

"I live in the United States in Los Angeles and there is obviously a lot of politics there that polarizes things and they separate different communities and it is a really scary and horrible thing. We want to send a message that green is good, you know? The planet will only ever look after you and love you. Go out and listen to Mother Earth, go out into nature, meditate. Think about what we are and who we are. Go back and return to the ancient way of life. We had it sorted – the truth is, we all need to return and it is not too late to do so."

If you could name some favourite tracks from the new album or ones that sum up the message strongest, which would you choose?

"In terms of the [favourite] song that I love it would be To Her Door and for the message it would be Two Vines. I had a vision a while ago about a city covered in vines that nature would aggressively take back what is rightfully hers. A lot of people have said that it wasn’t for the white man, this world would be a lot more harmonious and we would stop trying to dominate things and we would swim with the river instead of trying to divert it into a dam, all of which is essentially unnatural."

What is it about To Her Door that you love so much?

"To Her Door for me is the sister track to the song Country from the first album. The only difference being there’s a vocal and we wrote it with Lindsey Buckingham of Fleetwood Mac! It ticks so many boxes for me. Fleetwood Mac have been huge influences on Luke and I for many years and they were my very first concert in 1986 in Sydney on the Little Lies tour. They’ve always found me and been there in my heart and never really left. It was wonderful.

"It was a bit of Wayne’s World moment when I clearly know we’re not worthy of working with Fleetwood Mac but Lindsey is such a wonderfully generous and kind gentleman, a bit like my friend Sir Elton John who you think are superhuman and god-like and in many ways they are, yet they appear to you in the most beautiful, kind and natural way."

Sticking with influences, if we were to describe Empire of the Sun, we would say that your sound is like if David Bowie and Kate Bush had a baby and its godparents were the Pet Shop Boys and Prince! That makes sense even more to us now we know some of the people you worked with on Two Vines...

"I always say it’s a pre-teen wet dream but I like you’re description better! The David Bowie connection came about because of two of my collaborators for the past five years worked with him in different ways. Tim Lefebvre was in the Blackstar band and Henry Hey helped Bowie bring his vision of Lazurus his stage play to life." 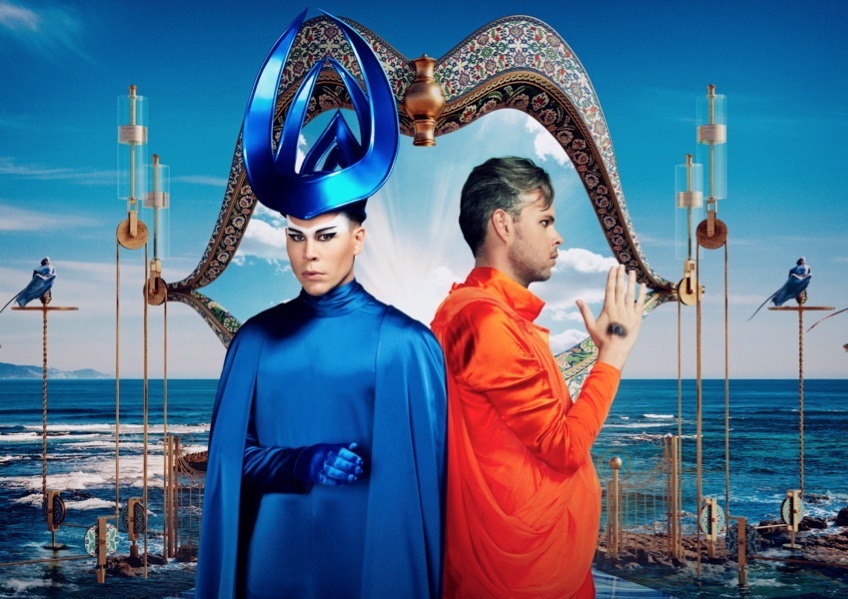 Speaking of plays, do you think Empire of the Sun’s back catalogue could transition to the stage?

"I did write the treatment to a film at one point but it just seemed a little premature. We have talked about doing a Vegas style permanent show together. Obviously I did many years with Cirque de Soleil so I understand that and know people who can bring that vision to life. We would like to do it at some point and you know, we’re still fairly young – there’s time to take it to another level."

There was quite the long gap between albums 1 and 2 and a much shorter break between albums 2 and 3. Is album 4 already in the works? Have you got a creative path you want to walk down next?

Empire of the Sun's new single High and Low is out now. The new album Two Vines is released on October 28. EOTS play The Roundhouse on October 13, with tickets on sale now.