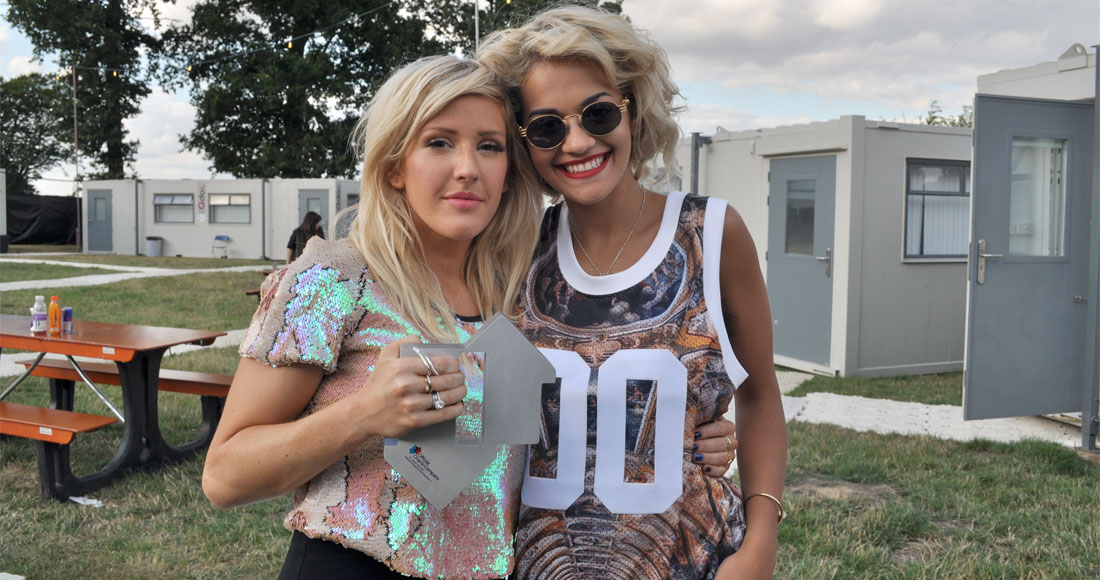 Ellie Goulding is the undisputed queen of the UK’s Official Singles Chart for a second week! The 26-year-old singer/songwriter from Herefordshire knocked Miley Cyrus’ We Can’t Stop off the top spot last Sunday to score her first ever Number 1 with Burn. The single is taken from the deluxe edition of her latest album Halcyon – retitled Halcyon Days – which is out tomorrow.

Sadly, Ellie was performing at the V Festival last weekend, so she was unable to make it into BBC Radio 1 to be presented with her Official Number 1 Award for Burn by the station’s Official Chart Show’s host Jameela Jamil live on air. However, to mark this milestone in her career, Rita Ora – who has three of the Official Charts Company’s prestigious trophies to her name – kindly stepped in to do the honours backstage at Hylands Park, Chelmsford.

You can see what happened when Ellie found out she was Number 1 last Sunday in the video clip below:

Avicii’s former chart topper, Wake Me Up, holds firm at Number 2, while Sonnentanz (Sun Don't Shine) by Klangkarussell FT Will Heard is new in at Number 3. The original version of Sonnentanz has been a massive hit on the continent for Klangkarussell, however the Austrian duo teamed up with 21-year-old London-based singer Will Heard for the UK release of the track.

DJ Fresh and Diplo debut one place behind them with Earthquake FT Dominique Young Unique (4), while the Cedric Gervais remix of Lana Del Rey’s Summertime Sadness is down one to Number 5.

There are three other new entries on this week’s Official Singles Chart: Following hot on the heels of his Official Number 1 single with The Saturdays, What About Us?, Sean Paul returns to the Top 10 today with new single, Other Side Of Love (7). The track is taken from his upcoming as-yet-untitled sixth studio album.

Shahid Khan, AKA Naughty Boy, also debuts inside the Top 10 with his new single Lifted FT Emeli Sande (8). The 28 year old co-wrote and produced Emeli’s breakthrough album Our Version Of Events, and has recently been working with Britney Spears and William Orbit on the US star’s comeback album, as well as X Factor 2012 winner James Arthur. Lifted is taken from Naughty Boy’s debut album, Hotel Cabana, which is out tomorrow and features the Top 10 hit, Wonder, and the Number 1 smash, La La La FT Sam Smith.

And finally, Matt Cardle and former Spice Girl Melanie C’s are new in today at Number 14 with their duet, Loving You.