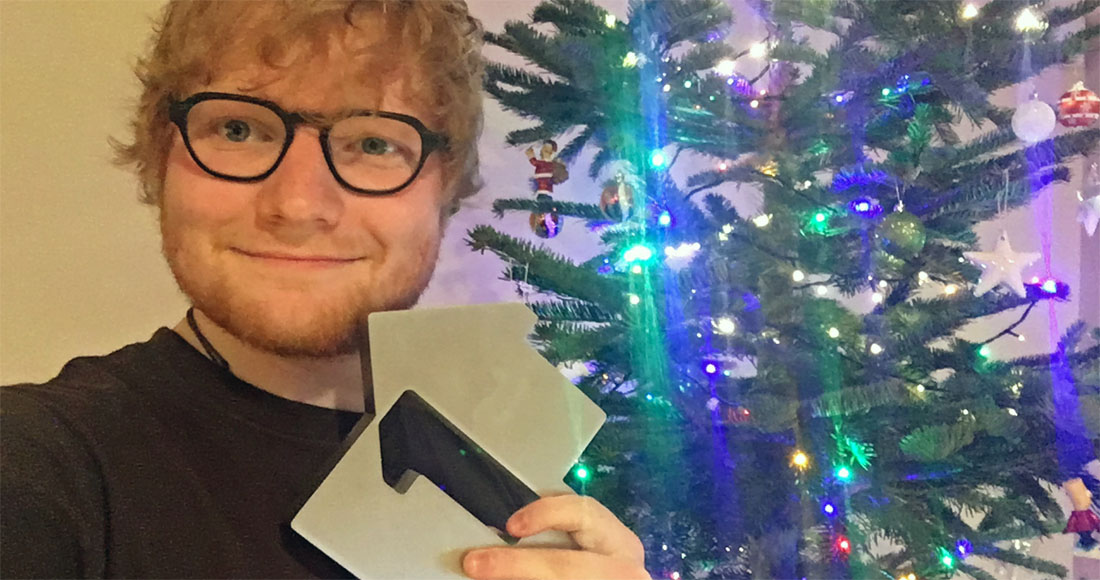 Congratulations to Ed Sheeran, who completes his ‘Perfect’ year by claiming the most coveted chart accolade of the year - the UK’s Official Christmas Number 1.

The Official Charts Company can confirm that Perfect wins this year’s festive crown with 85,000 combined sales acquired this week, split across 45,000 downloads and 6 million streams. Earlier this month, Ed released new versions of the track featuring Beyoncé and Andrea Bocelli.

In a video message to his fans, Ed tells OfficialCharts.com: “Thank you very much for making Perfect Christmas Number 1. This is an actual dream come true and I’m very proud and happy. Thank you so much and have a very Merry Christmas, happy holidays and a Happy New Year.”

The track has today (Dec 22) been certified double platinum by the BPI, achieving 1.23m combined UK sales and streams to date.  Perfect has held off several competitors from the snowy summit this week; its nearest rival, Eminem’s River (which also features Ed), finishes at Number 2, while a campaign to get Wham’s Last Christmas to the top to mark one year since George Michael’s death finishes at Number 3.

Elsewhere, Mariah Carey’s 1994 festive classic All I Want For Christmas Is You is at 4, and rapper Big Shaq climbs two places to Number 6 with Man’s Not Hot following a special Christmas Edition release of the track.

MORE: Every Christmas Number 1 single ever

Also earning a place in 2017’s Official Christmas Singles Chart Top 10 is The Pogues’ Fairytale Of New York ft. Kirsty MacColl at 7. It’s the first time the song has been in the Top 10 in ten years – it peaked at Number 2 upon its original release in 1987.

A further 13 Christmas classics make up this year’s Christmas Top 40, including the original 1984 version of Band Aid’s Do They Know It’s Christmas? at 12, Brenda Lee’s Rockin’ Around The Christmas Tree (14) and Shakin’ Stevens’ Merry Christmas Everyone (15).

Elton John’s 1973 hit Step Into Christmas achieves a new personal best at Number 18, Chris Rea’s Driving Home For Christmas finishes at 20, Michael Buble’s rendition of It’s Beginning To Look A Lot Like Christmas is at 22, and Wizzard’s I Wish It Could Be Christmas Everyday lands at 23.

Further down, Slade’s Merry Xmas Everybody (29), Ariana Grande’s Santa Tell Me (32), John & Yoko’s Happy Xmas (War Is Over) (35), Leona Lewis’ One More Sleep (36), Andy Williams’ It’s The Most Wonderful Time Of The Year (37) and Paul McCartney’s Wonderful Christmastime (38) and all earn a spot in the Christmas Top 40. Check out the UK's best-selling Christmas songs of all time here.