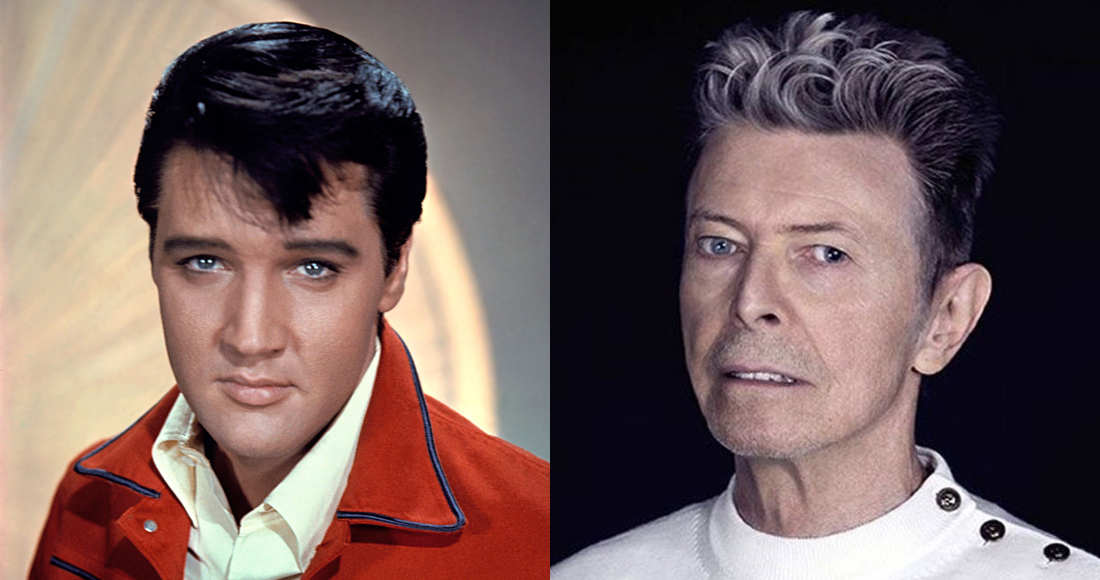 The impact of David Bowie continues at pace this week as the Starman dominates the Official Albums Chart and matches the chart record of another late, great music legend.

Following his death earlier this month, Bowie's final album Blackstar spends a third week at Number 1, and heads up five Bowie releases make the Top 10 simultaneously: Best of Bowie (3), Nothing Has Changed (5), Hunky Dory (9) and The Rise and Fall of Ziggy Stardust and the Spiders from Mars (10). This feat means Bowie is the first act to score five albums in the Top 10 since Michael Jackson managed six in 2009 after his passing.

But that's not all. The Bowie influence continues farther down the Official Albums Chart, with the rock legend landing seven more Top 40 entries, bringing his total to 12. This brings Bowie level with Elvis Presley's chart record for simultaneous Top 40 entries, which the King achieved following his death in 1977.

Aside from Bowie's Top 5 domination, Adele's 25 stays firm at Number 2 this week, while Justin Bieber's Purpose climbs a spot to 4.

Highest new entry this week goes to Suede, who return to the Official Albums Chart after almost six years with Night Thoughts, their seventh Top 10 album, at Number 6.

It's an 11th Top 40 for Megadeth, as Dystopia goes straight in at Number 11, while Elle King's performance on Graham Norton sees her album Love Stuff rocket 40 places to land at Number 18. King’s debut record also tops our first ever Official Americana Albums Chart, which was launched this week.

David Bowie sees four albums break back into the Top 40 this week: Heroes (28), Diamond Dogs (30), Station to Station (32) and Scary Monsters (36) all make a triumphant return.

Americana star Lucinda Williams is new at 33 with The Ghosts Of Highway 20 and Rachel Platten’s Wildfire rebounds back into the Top 40 at 35.

Bristol band Coasts are brand new at Number 38 with their self-titled debut, and Rudimental’s We The Generation pops up again this week, back at 39.

Look back through all of David Bowie's album covers below: