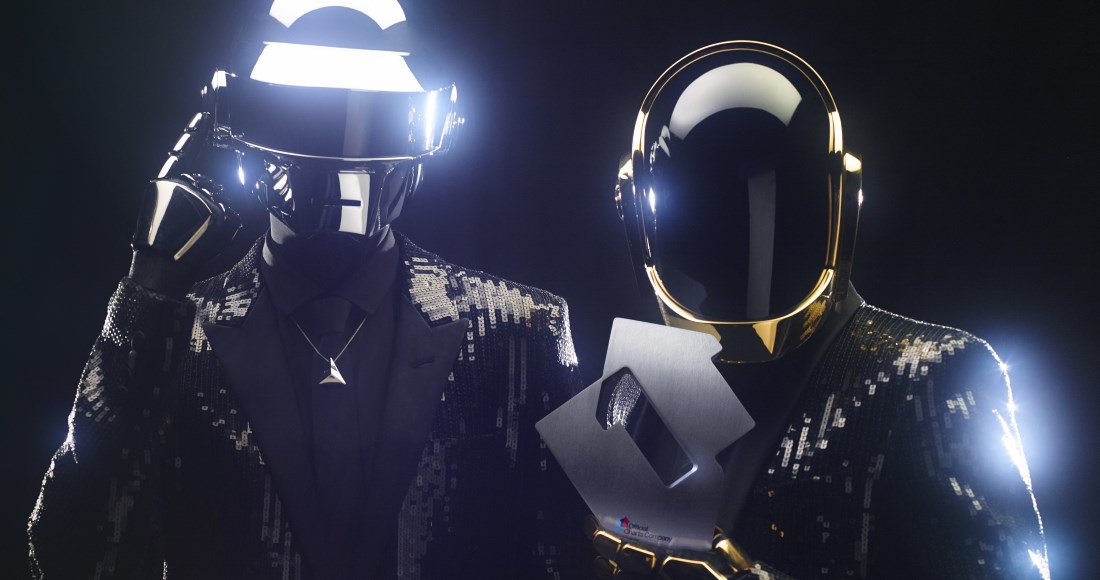 After 28 years of dancefloor-filling hits, this week Daft Punk sadly announced their split.

Formed in 1993, the French duo (real names Thomas Bangalter and Guy-Manuel de Homem-Christo) were one of the most influential groups in dance music history, loved internationally for their clever and catchy multi-genre-infusing tracks.

To celebrate their success over the last three decades and say au revoir to one of music's most iconic acts, we've compiled Daft Punk's biggest hits on the UK's Official Chart. First, a rundown of the Top 5...

Taking you on a musical odyssey (its full-length version clocking in at 7 mins) armed with just three words and some seriously good instrumentation, Around The World is a perfect display of Daft Punk's talent at production, and lands at Number 5 with 478,000 chart sales to date in the UK, including 24m streams.

An all-time classic truly deserving of it's place in the Top 5, One More Time has the ability to get even the most reluctant of dancers moving. It's Daft Punk's fourth biggest song in the UK with over 806,000 chart sales - it also takes the most first week paid-for sales, with 59,000 copies sold on its week of release in 2000.

One of two collaborations with The Weeknd for his 2019 Starboy album, I Feel It Coming is a slinky slow jam with more than a hint of Michael Jackson about it. Clocking 102.8m streams in the UK alone, it's Daft Punk's second most streamed song and third most popular UK hit overall.

Bookending The Weeknd's album of the same name, album opener Starboy - a menacing meditation on dark side of fame and celebrity offset by Daft Punk's stuttering electropop production - is by far Daft Punk's most streamed track, with a mighty 184.6 million plays.

Daft Punk's most successful hit in the UK is 2013's Get Lucky, a disco-infused collaboration with Pharrell that trailed their fourth (and now final) studio album Random Access Memories. Perhaps surprisingly, it's their only track to reach Number 1 on the Official Singles Chart, with a mega 2.25 million chart sales.

With an immediately recognisable guitar riff courtesy of Nile Rodgers, and the ultimate earworm chorus, Get Lucky is the 45th best-selling single of all time in the UK, with 1.48m paid-for sales. It's also the pair's third most-streamed track with over 83 million plays since records began in 2014.