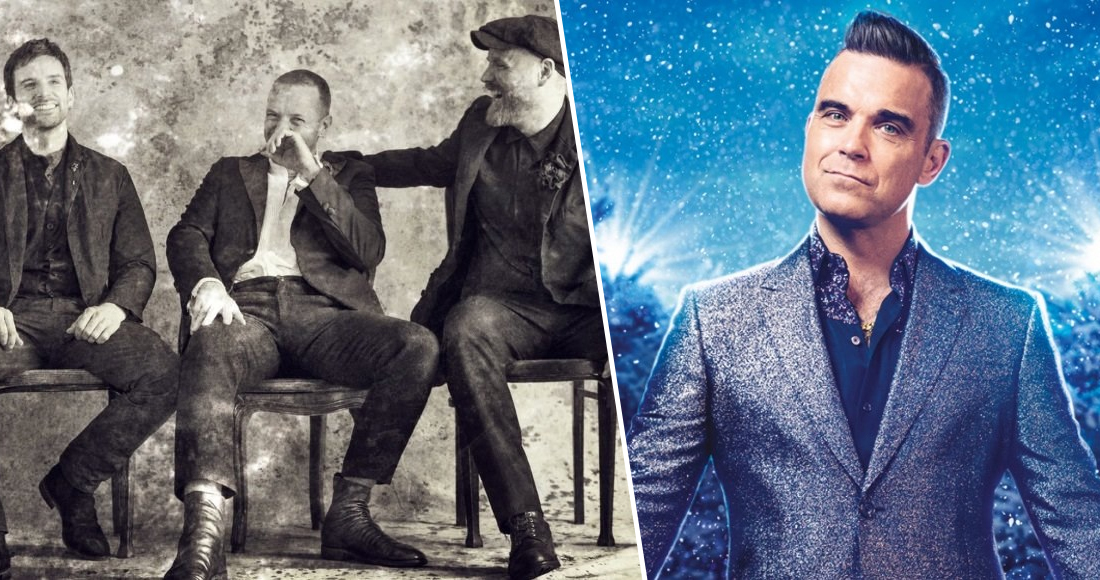 Two chart titans with 19 UK Number 1 albums between them are going head-to-head for chart supremacy this week.

Snapping at their heels this week is chart legend Robbie Williams at Number 2. Rob’s first festive album The Christmas Present is the best-selling album of the week so far on physical formats. Initial sales updates had Robbie ahead of Coldplay – can The Christmas Present regain its earlier momentum to give Robbie his 13th UK Number 1 album? If he’s able to do it, he’ll match Elvis’ all-time record for the most chart-topping albums by a solo artist.

A man with nine UK Number 1 albums to his name, Sir Rod Stewart is on course for Number 3 with You’re In My Heart, which sees the legendary British entertainer team with the Royal Philharmonic Orchestra to celebrate his golden anniversary as a solo artist.

Lewis Capaldi’s Divinely Uninspired to a Hellish Extent sticks around In the midweek Top 5 at Number 4 following the release of its extended edition (the most streamed album so far this week), and Leonard Cohen’s first posthumous album Thanks For The Dance enters at Number 5 midweek.

Andre Rieu is eyeing up a landmark 10th UK Top 10 album with Happy Days at 6, Bing Crosby and the London Symphony Orchestra’s Bing at Christmas jingles its bells at 9, and actor Luke Evans is on track for Number 10 with his debut album At Last. Just outside the top flight are Martin & Shirlie Kemp; the husband-and-wife duo of Spandau Ballet and Wham! stars are at 11 with In The Swing Of It.

Kylie Minogue’s Number 1 greatest hits Step Back In Time is on track for a Top 40 return after the release of an expanded version (14), Beck is on the cusp of a ninth Top 40 album with Hyperspace (20), and following the 28th anniversary of Freddie Mercury’s death, Queen’s Greatest Hits (30) and The Ultimate Collection (37) are on course for Top 40 returns.

Finally, Trippie Redd’s latest mixtape A Love Letter To You 4 (33) and Love You To Bits from No-Man (36) could sneak into Friday’s final Top 40.