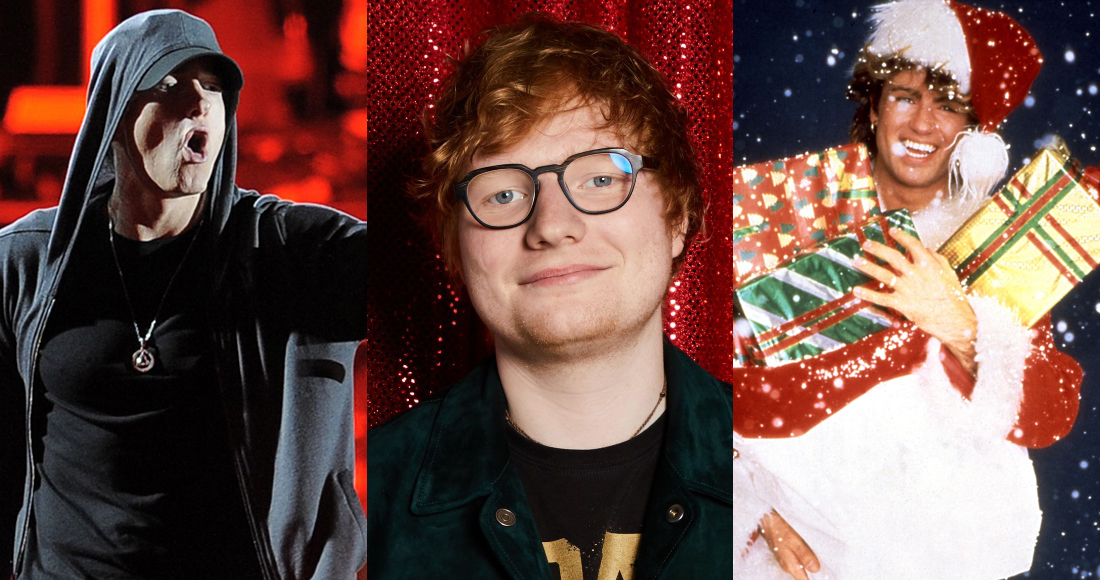 By Rob Copsey
Ed Sheeran is leading a three-way battle with Eminem and Wham for the 2017 Christmas Number 1 after 24 hours, OfficialCharts.com can confirm.
Official Charts Company early sales reports (based on pre-orders and early sales data up to midnight last night), indicate that Ed Sheeran opens the week as front-runner in the biggest chart race of the year.  Ed’s latest single Perfect is currently just ahead of new entry from US rapper Eminem, River (2), which also features Ed.
Wham's Last Christmas is riding on both of their tails at Number 3. Last Christmas is the best-selling song ever never to reach Number 1, and this year a campaign backed by bandmate Andrew Ridgeley has been launched to get the festive classic to the top one year after George Michael's death.
Christmas hits by Wham!, Mariah Carey and The Pogues have also been proving incredibly popular on streaming services in 2017, so expect to see a streaming boost for these classics in the chart as the week progresses.
Elsewhere, AC/DC’s For Those About To Rock (We Salute You) opens at 22, following a fan campaign in remembrance of the late Malcolm Young. Michael Ball and Alfie Boe's all-star charity single You Bring Me Sunshine, featuring Jason Manford, Imelda Staunton Gareth Malone and more, is at 37, while Ralph McTell's Streets Of London - reworked with Annie Lennox and the Crisis Choir - is just outside at 41. Money raised from the single goes to Crisis. See the full list of Official Christmas Chart contenders.
But there is a long long way to go yet. The majority of streams still have to be counted, along with 6 days of sales, the race is still wide open at this stage.
Whoever you're backing, this is the time to get behind your favourite contender. This year’s Official Christmas Number 1 race kicked off Friday, December 15 with the cut-off point for sales and streams to be counted toward the chart being midnight Thursday December 21. Look back at every Official Christmas Number 1.
The Christmas Official Chart Top 40 will be counted down on The Official Chart on BBC Radio 1, Friday, 22 December from 4pm. The full Top 100 will be published on OfficialCharts.com at 5:45pm.