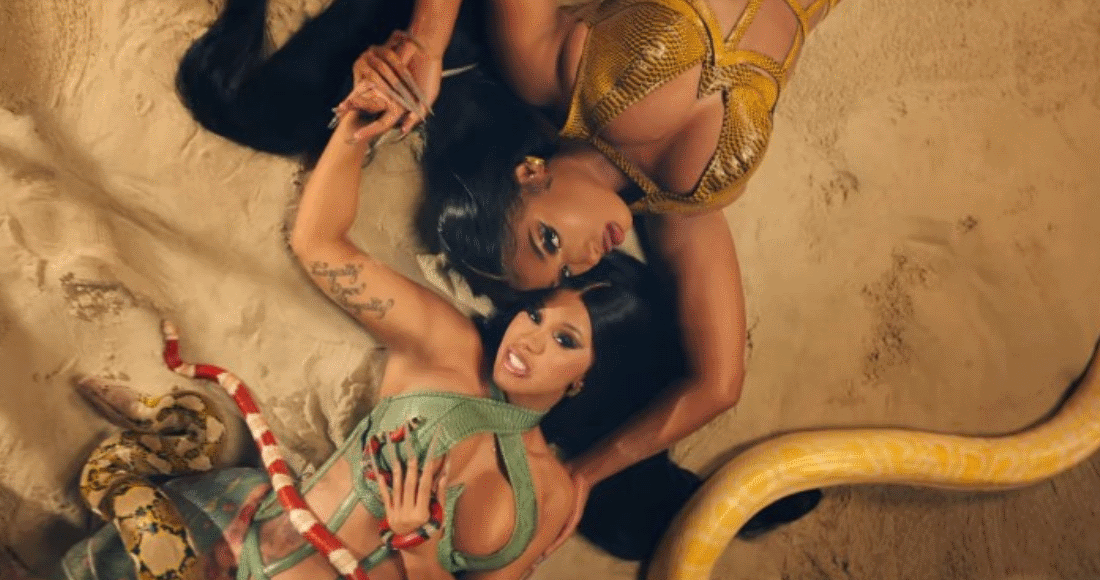 Cardi B and Megan Thee Stallion’s WAP looks set for a second week at Number 1 in the UK, while there's a flurry of big climbs on the cards for several future hits.

US rappers Cardi B and Megan Thee Stallion celebrated their first UK Number 1 last Friday, when their leave-nothing-to-the-imagination track took the top spot on the Official Singles Chart. Now it looks like the pair's explicit anthem will reach the summit for a second time as WAP leads tonight's Official Chart: First Look.

Nathan Dawe and KSI could be on for a new peak position this Friday as Lighter gains one place, up to Number 2 after 48 hours of the new chart week, as does Mood by 24kGoldn ft. Iann Dior (3).

Three big songs are on track to hit the UK Top 10 for the first time this week - step forward producers Paul Woolford and Diplo whose collaboration Looking For Me ft. Kareen Lomax is up five places to Number 7 midweek. Jason Derulo’s Take You Dancing glides seven places forward to Number 8, while Miley Cyrus’ disco-tinged latest offering Midnight Sky is up seven to Number 10.

Just outside the Official Chart: First Look Top 10 there’s huge climbs on the horizon for Little Mix’s Holiday (up five to Number 13), and Clean Bandit & Mabel's Tick Tock ft. 24kGoldn clocks up six moves to Number 14. Canadian singer-songwriter Tate McRae also continues her ascent up the Official Singles Chart as You Broke Me First, advances another 7 places midweek to Number 15.

Finally, Sigala and James Arthur look to claim this week's highest new entry with their collaboration Lasting Lover (20). We spoke to Sigala about how the new track - which was written by Lewis Capaldi - came about.

The Official Chart: First Look is based on preliminary sales and streaming data from the first 48 hours of this week’s chart race, the fuller picture will emerge as more data arrives throughout the week.

The final Official Singles Chart Top 40 will be unveiled on BBC Radio 1’s Official Chart with Scott Mills this Friday from 4pm, with the full Top 100 published on OfficialCharts.com from 5.45pm.