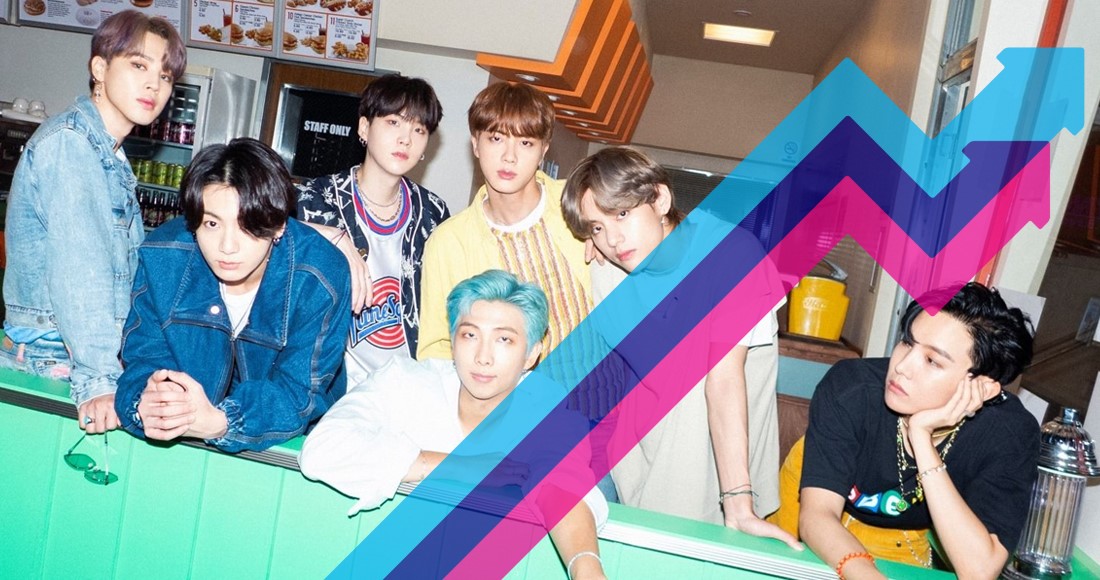 The septet's latest hit is a pure-pop, disco-inspired number which has been released with the aim of making listeners feel good. With its super-catchy chorus and plethora of hooks, it seems to be living up to the band's hopes.

Group member RM spoke to USA Today about the track: "The goal of 'Dynamite' is really simple ... to explore the world with positive vibes and energy. We’ve been through all the sadness and desperation but with this song and performance we just hope the world gets more positive and be happy."

The track is set to be the band’s highest charting song yet, currently battling for this week's top spot, as well as being their first Top 10. Their Official Singles Chart peak to date is 2019’s Boy With Luv ft. Halsey which reached Number 13.

Dynamite’s music video notched up 101 million global views in 24 hours, the highest 24-hour view count ever, surpassing Blackpink’s How You Like That, and the first video to surpass 100 million views in one day,

Also trending this week is Headie One's new single Ain't It Different ft. AJ Tracey and Stormzy, which is on course to be Headie’s strongest chart debut yet. His previous single, Only You Freestyle with Drake debuted at Number 9 before climbing to a peak of Number 5.

Rapper 24kGoldn makes two appearances in this week's trending Top 20: Mood ft. US rapper and singer Iann Dior is on track to climb into this week's UK Top 40 for the first time, while Clean Bandit's Tick Tock - which he features on alongside Mabel - eyes a Top 40 debut this week.

Conan Grey’s Heather is making waves this week. The US singer-songwriter and YouTuber is set to earn his first UK Top 40 hit with the folk-pop ballad following the unveiling of its thought-provoking music video.

Abra Cadabra sees a huge resurgence with On Deck, following a mega remix of the track featuring members of Drill group OFB, while London rapper Nines makes waves with new NSG collaboration Airplane Mode. Further new entries come from Fredo with his Daily Duppy ft. GRM Daily, Safe To Say by Aitch, and the return of indie-pop trio London Grammar with Baby It’s You – their first music as lead artists since 2017.

Finally, The Killers claim two spots on the Official Trending Chart following the release of their sixth studio album Imploding the Mirage - heading for a Number 1 debut – with album openers My Own Soul’s Warning and Blowback.