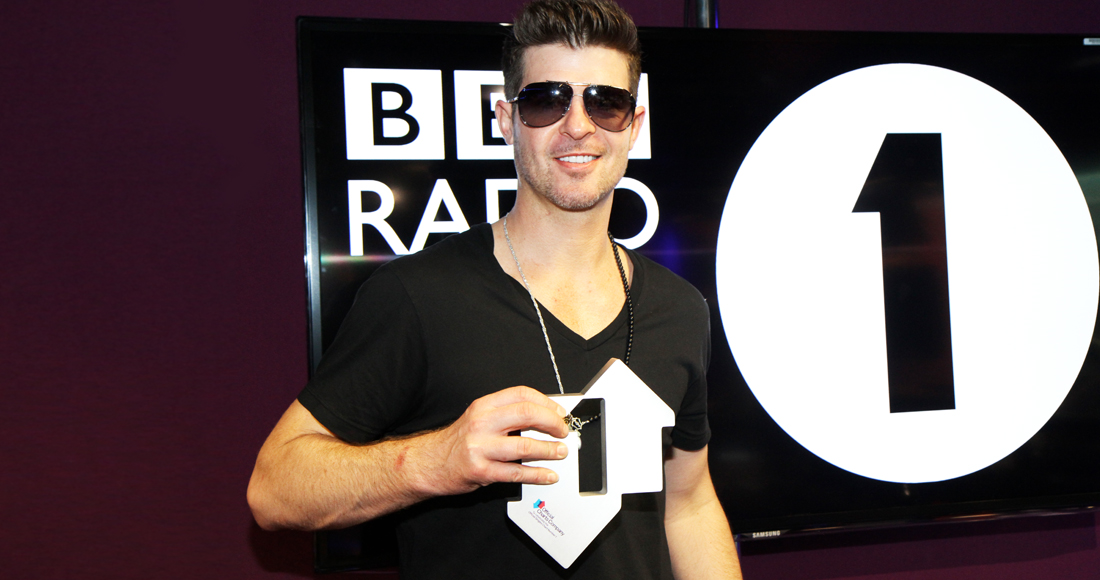 Does Pharrell have the Midas touch? Robin Thicke’s Blurred Lines, with a little help from Pharrell, has become the latest single to join the UK's prestigious million sellers club, OfficialCharts.com can confirm.

The cheeky summer anthem, which also features US rapper TI and über producer Pharrell Williams, is only the 137th single to sell over a million copies in British history, and the second track released in 2013 to do so; Daft Punk’s Get Lucky, which also features the seemingly Midas touch of Pharrell alongside Chic legend Nile Rodgers, broke though the million copies sales barrier at the end of last month.

On hearing the news, Pharrell told OfficialCharts.com: "I'm humbled by all of the love the UK fans have shown. But, when you are working with incredible talent like The Robots and Robin, great things are bound to happen."

We also caught up with recent collaborator Nile Rodgers who performed on the first of Pharrell’s two million sellers, Get Lucky, alongside French electronic duo Daft Punk. Rodgers and Williams share an approach to hitmaking that is not satisfied with being mere performers, with both artists adopting multiple roles of writer and producer too (Williams co-wrote, produced and performed on Blurred Lines).

In a forthcoming interview with OfficialCharts.com, on the subject of working with Pharrell, the New York king of disco gushes, “When he and I were doing the video [for Get Lucky], I was just so impressed by him as a person, because we spent most of our time not talking about music, but other subjects! He’s a bright, bright, human being, his artistry goes without saying. There’s a mutual admiration there.”

Blurred Lines, which is taken from the US R&B star’s new album of the same name, returned to the top of the Official Singles Chart on Sunday (July 14) for its fifth non-consecutive week at the top. The album from which the track is taken, also called Blurred Lines, is out this week and currenty set to debut at Number 1 on the Official Albums Chart this Sunday.

Martin Talbot, Chief Executive of the Official Charts Company comments, “It is a further sign of the strength of the UK singles market that Blurred Lines is the second track released this year to pass the million mark. Great credit not only to Robin Thicke and TI, but to Pharrell Williams too, who becomes a double millionaire in the space of just a month. Through Blurred Lines and Get Lucky, Pharrell has sold two million singles in just about 16 weeks. Impressive work!”

Elton John’s double A-side, Something About The Way You Look Tonight / Candle In The Wind '97, remains the UK’s biggest selling single of all-time, racking up over 4.91 million sales since its release in 1997. Band Aid’s Do They Know It’s Christmas? (1984), Queen’s Bohemian Rhapsody (1975), Wings’ Mull Of Kintyre / Girls’ School (1977) and John Travolta and Olivia Newton-John’s You’re The One That I Want (1978) complete the Top 5.

You can see the full list of all the UK’s 137 million selling singles below: