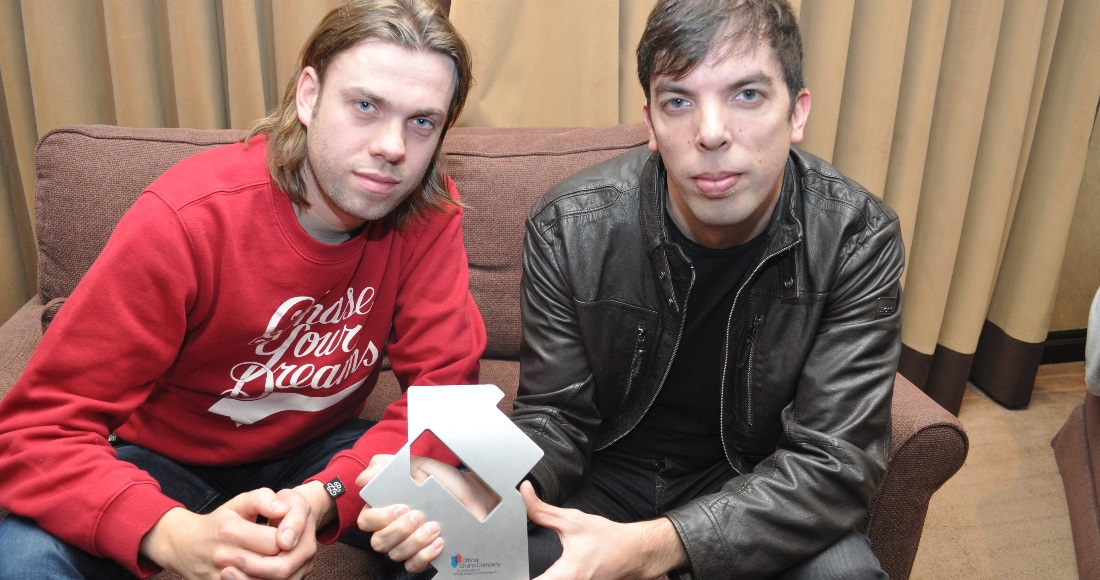 OfficialCharts.com caught up with Bingo Players, who topped the Official Singles Chart with Get Up (Rattle) earlier this year, to present them with their Official Number 1 Award for the track!

Dutch dance duo Bingo Players (AKA Paul Baumer and Maarten Hoogstraten) scored their first Official Singles Chart Number 1 in January with Get Up (Rattle) FT Far East Movement. We caught up with the band earlier this week while they were in London to present them with their belated Official Number 1 Award for the track!

“It’s amazing!” Paul told OfficialCharts.com. “We really didn’t expect to be Number 1 in the UK; we were aiming for a Top 20 song, and then we heard we were in the race for Number 1! We wanna thank all our UK fans who supported us by buying Get Up (Rattle)!”

Get Up (Rattle) knocked Will.I.Am and Britney Spears’ Scream And Shout off the top of the Official Singles Chart on January 27, and held onto the Number 1 spot for two weeks. To date, it is the seventh biggest selling single of 2013 so far.

As well as being a firm club favourite, part of the track’s appeal is down to its accompanying promo video, which features a brace of vengeful ducks enacting revenge on a gang of hoodies.

“We didn’t want to make a typical dance video with y’know, the models and the champagne and the bubble baths,” explains Paul. “And then our manager told us that he’d been dreaming about ducks. So he went to Ministry Of Sound and they came up with the concept, and we loved it!

“You never know when you do a video… It was a bit of a risk, but a lot of people really liked it on YouTube so that’s cool.”

We also quizzed them about their now infamous moniker, and the duo revealed that they have never actually played bingo in their lives!

“A lot of people think it’s like a tribute to our grandmothers, but it’s not!” laughs Paul. “It’s just a silly name. When you first start out, you know there are a million DJs out there, so we wanted to have a name that stood out. We thought ‘People will notice this name’.”

“But once you take a name and get success with songs, you can’t change it!” adds Maarten.

Relive the killer ducks in all their gory dancefloor-friendly glory right here: