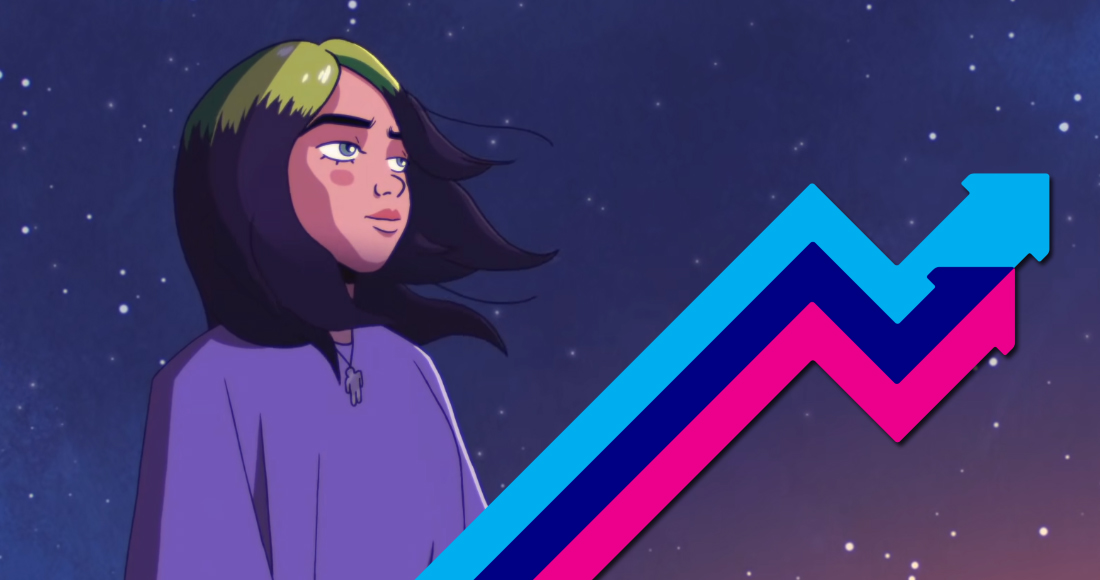 Currently on course to debut at Number 4 on this week’s Official Singles Chart as the highest new entry of the week, My Future is Billie’s first single since her Number 1 Bond theme, No Time To Die, was released in February. Billie holds the biggest Number 1 of 2020 to date with the track.

My Future was written during lockdown and offers Billie's familiar melancholic style of songwriting, accompanied by a dash of hope as she looks towards better things to come.

Billie has spent much time in isolation reflecting on her relationship with herself: "When we wrote this song, it was exactly where my head was at - hopeful, excited and a craaaazy amount of self-reflection and self-growth." Billie said in a statement, "but recently it has also taken on a lot of new meaning in the context of what's happening in the world now."

If the track stays on course it'll be Billie's fourth Top 5 hit. See all of Billie's hit songs and albums on her Official Chart history.

Further down, choirmaster and presenter Gareth Malone could lead another choir to chart success as his Great British Home Chorus and the London Symphony Orchestra are set to enter this week’s Top 20 with You Are My Sunshine.

Featuring 11,000 voices from across the UK, the track was a huge production which saw 12 weeks of rehearsals online, available on YouTube after broadcast for singers to catch up. In week five, Gareth was joined virtually by stars of the chart-topping Military Wives choir and the film of the same name.

Further down, PS1 and Alex Hosking continue to climb with Fake Friends, while Kygo & Tina Turner could see a return to the Top 40 with their remix of What’s Love Got To Do With It. Looking For Me - a collaboration between producers Paul Woolford and Diplo, as well as singer, songwriter & producer Kareen Lomax – could enter the Top 40 for the first time this week, climbing 12 places to 38 midweek. Jason Derulo is also moving on up with Take You Dancing.

Finally, French-British rapper Octavian makes waves with Rari ft. Future, and The Vamps are back with their new single Married in Vegas.