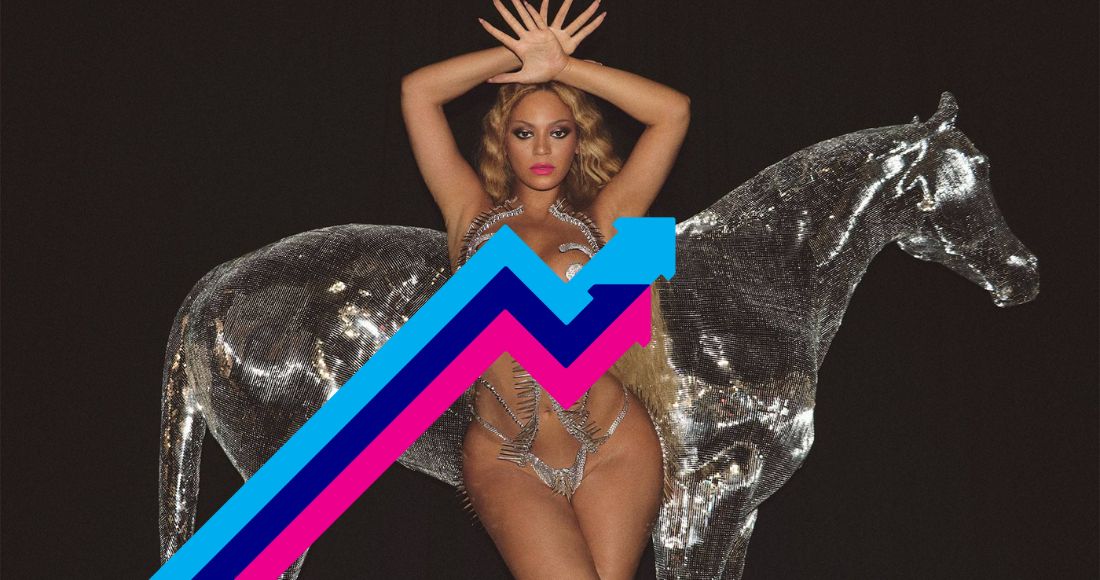 Proving once and for all that you just can't keep a good big pop girl down, Beyoncé's potential dominance of the Official Charts this week continues as we can announce that RENAISSANCE album track CUFF IT is officially the UK's Number 1 Trending Song.

The fourth track on RENAISSANCE, CUFF IT comes with an irresistible 70s groove (which makes sense, since it directly samples Good Times by Chic) as Beyoncé says that she's in the mood to "f*ck something up."

According to yesterday's Official Charts First Look, CUFF IT is one of three RENAISSANCE tracks looking to impact the Official Singles Chart this Friday - with buoyant lead single BREAK MY SOUL currently entering the race for Number 1 against LF SYSTEM.

Beyoncé's seventh album as a solo artist (and her first proper solo project since 2016's Lemonade), RENAISSANCE is a decadent and debauched disco and handbag house record, that comes with a raft of collaborators; from Grace Jones to Tems, to Drake and BloodPop. RENAISSANCE is, of course, currently on track to debut at Number 1 in the UK - find out more about that here.

Other new entries on the Official Trending Chart this week include Propellor, which sees British-Ghanian producer Jae5 team up with Dave and Bnxn, to Fred Again's new collaboration with Swedish House Mafia (Turn The Lights On Again) and viral singer-songwriter Lauren Spencer-Smith's new single Narcissist.

Meanwhile, a number of tracks could see some impressive gains on the Official Singles Chart come Friday. These include James Hype's Ferrari and Luude's Big City Life both reaching new peaks inside the Top 40, while Lady Gaga's recent two-date takeover of the Tottenham Hotspur Stadium for the Chromatica Ball sees more recent single (and concert closer) Hold My Hand rise a potential 10 spots.