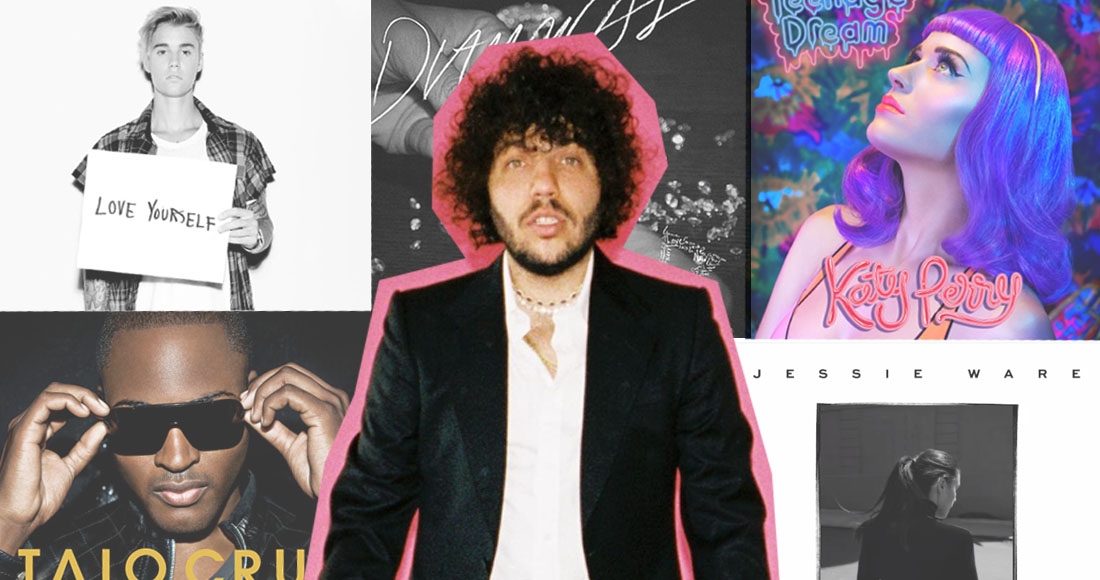 At just 30 years old, US songwriter and producer Benny Blanco has amassed an enviable catalogue of global pop smashes.

In 2008, at 15, he was placed under Dr Luke's tutelage and co-wrote/produced his first Number 1 - Katy Perry's I Kissed A Girl. In 2011, he broke away from Dr Luke and has since turned out a string of hit singles for acts including Maroon 5, Selena Gomez, The Weeknd and Jessie Ware plus album tracks that regularly rank among fans' favourites. Now,

Take a look at a selection below, before we reveal the best-selling Benny productions below.

While I Kissed A Girl was Benny's breakout hit, Katy's 2011 single Teenage Dream is a modern day classic, often name checked by artists as a song they wish they'd written. The track - about a new love making you feel young again -  was co-written with Katy, Bonnie McKee, Dr Luke and Max Martin. But, as recalled by McKee in an interview, it was ultimately inspired by Benny, who suggested The Teenagers' 2007 single Homecoming as a template for the track.

A popular cut from her 2008 Circus album, Shattered Glass is one of Benny's productions during his partnership with Dr Luke. The track's lyrics about feeling trapped by fame was one of the few to offer some insight into Britney's troubled 2007.

Produced by Benny and co-written with Ed Sheeran and Justin, Love Yourself ranks as the producer's biggest hit for another artist, with 2.26 million combined sales and streams in the UK. The song spent six weeks at Number 1 in the UK in 2015/2016, narrowly missing out on the Official Christmas Number 1 to The NHS Choir.

An often forgotten single from Jessie's second album Alive, Benny teamed up with Swedish hitmakers Stargate on Thunder, which Jessie says she co-wrote with Benny in half an hour on the way to the airport. Proof that sometimes, good work can come in a bolt of creativity?

In 2012, Rihanna surprised the world by leading her Unapologetic album with a ballad. According to Benny, who worked with Ri's longtime collaborators Stargate on the song, the pair wanted to deviate from her usual sound and aim for something that might be expected from the likes of Kanye West. The whole song was done at lightning pace; Sia wrote the lyrics in 14 minutes.

Benny co-wrote and produced this popular album track from Bruno's Unorthodox Jukebox record. Inspired by a woman who stole Bruno's watch, the star said in an interview with MTV that Benny is "a good friend" and marked the first time the pair worked together.

One of Benny's first productions after breaking away from Dr Luke turned out to be huge success. Moves Like Jagger may have missed Number 1 in the UK, but it's the second best-selling track ever not to reach the top spot.

Anyone who's listened to the episode of Jessie Ware's Tables Manners podcast with Benny will know the pair are good friends. He produced several tracks on her 2014 album Tough Love, notably its sparse and subtly addictive title track.

What would turn out to be Avicii's final single before his untimely death in April this year was co-written and produced by Benny and Cashmere Cat.