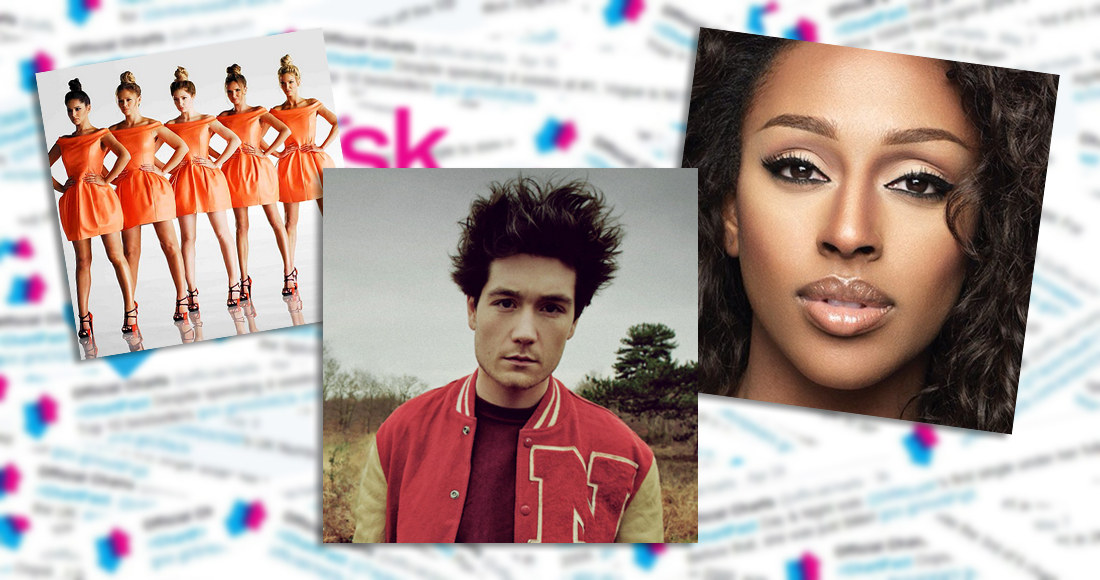 Our new #AskOfficialCharts feature is your opportunity to quiz us with all those niggling chart questions you simply can't sleep for not knowing. Prepare for some pub quiz weaponry with our first dive into the #AskOfficialCharts postbag…

On the singles front, as we all know Cheryl holds the record for most Number 1s by a British female solo act, with five chart-toppers to her name. She’s followed by Rita Ora (4) and Geri Halliwell (4). Currently on three are Leona Lewis, Jess Glynne, Jessie J, Pixie Lott, Olivia Newton-John (born in Cambridge, fact fans), Sandie Shaw, Alexandra Burke and Lily Allen.

When it comes to Top 3 singles, Leona leads the way with a smashing six. Cheryl, Geri, Jessie, Pixie and Olivia all have five, as does Cilla Black.

Looking at the Top 10s, it’s time for some vintage acts to step forward. It’s a tie for first place, with both Shirley Bassey and Petula Clark scoring 12 Top 10s over their career. They’ve also both scored four Top 3s and two Number 1s.

Behind them on 11 are Olivia, Cilla, Emeli Sandé and Dusty Springfield. At her current hit rate, it looks like Emeli could be topping this table very soon!

Two artists share the gong for most Number 1 albums by a British female solo act. Kate Bush was first, thanks to Never For Ever (1980), Hounds Of Love (1985) and The Whole Story (1986) all topping the Official Albums Chart.

The late, great Amy Winehouse equals this record – Back To Black (2006), Back To Black: The Deluxe Edition (2007 and then eligible to chart separately) and Lioness: Hidden Treasures (2011) all hit Number 1.

Who’s really got The X Factor?

We had a few of you ask about The X Factor – in particular how many weeks acts coming from the show have spent on the Official Singles Chart.

Looking at the finalists – so everyone who performed on the live shows across all 11 series – we can see that 37 X Factor-related acts have scored at least one Top 75 hit. That includes the four times that X Factor finalists have appeared on a special charity single, which kicked off in 2008 with Alexandra Burke’s crew getting to Number 1 with a cover of Mariah Carey’s Hero.

Leading the pack for weeks on chart are One Direction, who have spent 249 weeks in the Top 75 since their first hit What Makes You Beautiful in 2011.

In fourth place are 2008 runners-up JLS, who coincidentally have the most chart-toppers of any X Factor UK act, with five songs going to Number 1. The band, who split in 2013, have scored 139 weeks in the Top 75.

And the act who beat them comes in fifth – Alexandra Burke’s three Number 1s and eight Top 40s have racked up 99 weeks on the chart.

And just outside the Top 5 are Little Mix with 95 weeks in the Top 75 across nine Top 40 hits. But with new single Black Magic on its way, we reckon the girls will be breaking the Top 5 very soon.

The X Factor act to spend most weeks on chart without reaching Number 1 is Rebecca Ferguson, who notches up 18 weeks in the Top 75.

Bonus ChartFact: The act who beat Rebecca, Matt Cardle, also has 18 chart weeks under his belt.

@officialcharts How much have Holler and Forever by the Spice Girls sold to date? #AsKOfficialCharts

Holler, released as a double-A side with Let Love Lead The Way, was notable in being the very last Number 1 for the Spice Girls – their ninth – back in 2000. It’s sold almost 260,000 copies – 106,000 of those in its first week alone – and lands as their 10th best seller. Its parent album Forever, which was memorably beaten to Number 1 by Westlife, has sold over 266,000 copies.

@officialcharts #AskOfficialCharts so you have sales for Girlband singles 'Something New' by Girls Aloud and 'Notorious' by The Saturdays?x

Which are the @bastilledan's sales of 'Bad Blood' debut album and 'Pompeii' single @officialcharts? #AskOfficialCharts

Pompeii, which was Bastille’s first Top 10, also reached Number 2 and has a combined chart sales figure of 1.16 million. It’s not quite a million-seller, however – it still has another 105,000 sales to shift before reaching that milestone. One to watch!

And speaking of blood…

Inspired by Taylor Swift’s major diss track Bad Blood hitting the Top 10, Alex in London emailed us wanting to know how many songs have reached the Top 40 with the word “blood” in them.

Just one song called Blood has made the Top 40, thanks to Editors in 2005, reaching Number 18. However, if you include Kylie’s Red Blooded Woman – which of course we do, because hello it’s Kylie – and other slight variations, it’s quite the bloodbath.

16 blood-themed songs have spattered across the Official Singles Chart. The first was Whitesnake’s Bloody Luxury in 1982. Only one has got to Number 1 – Michael Jackson’s Blood On The Dancefloor in 1997.

Ed Sheeran’s Bloodstream has spent the longest of them all on the chart, peaking at Number 2 and scoring 20 weeks so far.

When it comes to "bleed" and "bleeding", there have been six Top 40 hits – the most successful being Leona Lewis's brilliant big bloody mess all over the carpet, Bleeding Love, which is a million-seller.

Got a question for Official Charts?

#AskOfficialCharts wants to hear from you. Find out more about how you really can ask us anything!