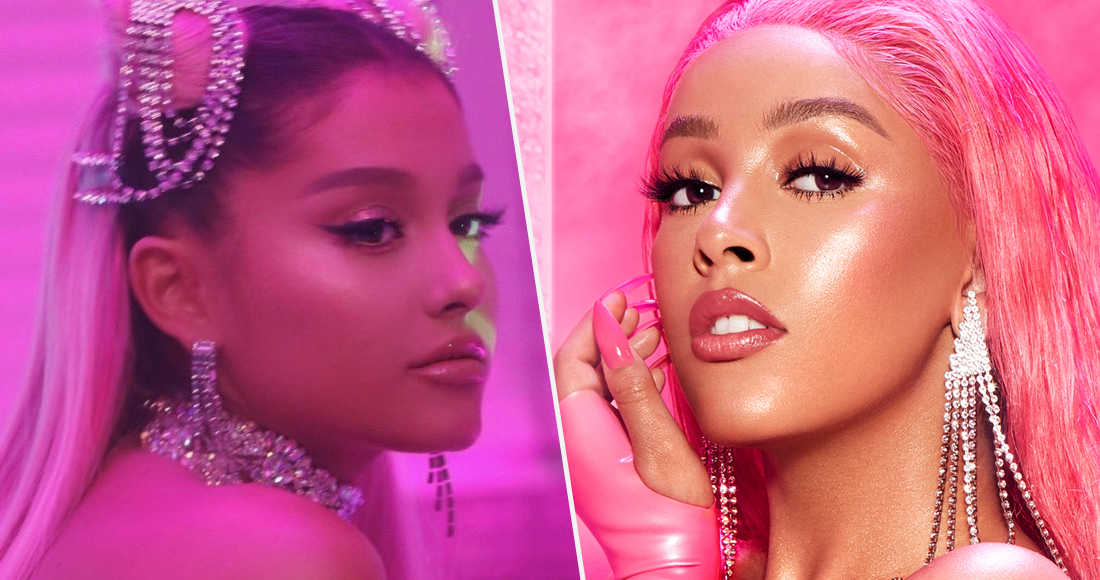 Ariana Grande has revealed that she has collaborated with Doja Cat.

The US pop megastar - currently battling for Number 1 on the Official Singles Chart with Justin Bieber collaboration Stuck With U - spilled the news with Zane Lowe on Apple Music.

Doja Cat is experiencing her own success as of late. Her breakthrough single Say So reached Number 2 on last week's Official UK Chart and topped the charts in the US on the back of a remix featuring Nicki Minaj. With both women at the top of their game, we're excited to hear a collaboration.

"I'm obsessed with her. I love her," Ari told Zane. "I was able to work with her earlier this year on this song that I want to save for whenever it's time again, to drop. I love her personality. I love what she brings to the table musically. She's just such a breath of fresh air. And she produces, and she does everything herself. I love that."

"So we did this thing and I remember sending it to her. And she was like, 'I'm doing it right now.' And I was like, 'Okay, there's no rush. I'm not putting out a project anytime soon, whatever.' And I think it was the next morning or something. She called me back, and she was twerking to it, and her hair was falling off. She twerked so hard that her wig fully flew off. And so she just goes off on it, and it's so much fun, and I love it. It's my favorite so far."

Ariana also confirmed to Zane that while she is getting creative in her newly-built home studio, she's "not comfortable" with releasing a full album right now.

"It's a great time to create because you're stuck with your thoughts and left in your head a little bit, so I think all creatives are extra inspired right now. I didn't have a home set up until quite recently and that's been so much fun, but also so bad for my sleep schedule and my eating schedule. I have to remember that there is life outside of making stuff and I have to leave the computer at some point.

"I think as far as creating goes, it feels really good. But also, I don't really feel comfortable putting anything out right now. It's a really tricky time for all of that... there's nothing to tell. I'm not putting one out [an album]. I've been making stuff. I've been making a lot of stuff, but that's not where my head is at right now."

Ariana released two albums in space of six months with 2018's Sweetener and 2019's Thank U Next, both of which went to Number 1 on the UK's Official Albums Chart, the latter picking up the biggest opening week of streams ever for a female artist album. View Ariana Grande's full UK chart history.