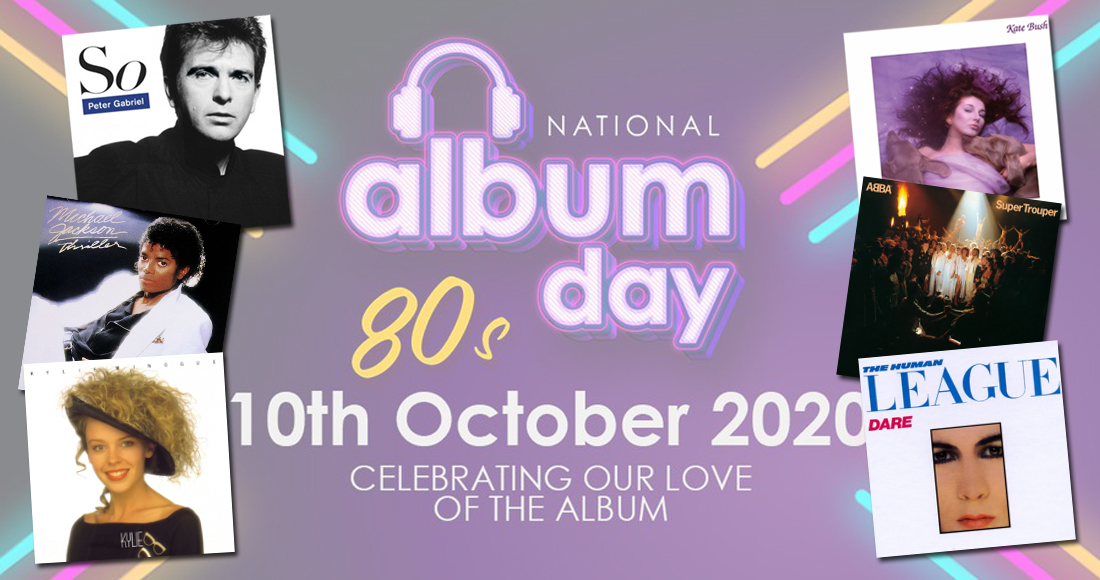 October 10 marks National Album Day, the UK's leading initiative that celebrates the UK's enduring love for the album format, organised by the BPI in association with Bowers & Wilkins.

The theme for the third annual National Album Day is the Eighties, giving the nation a chance to reflect on their favourite albums from that iconic decade. For the first time ever, event-exclusive coloured vinyl reissues are hitting the high street to commemorate NAD, with records from the likes of Duran Duran, Meat Loaf and Cyndi Lauper up for grabs.

We're taking it back to the 80s too in celebration, looking back at every Number 1 album of the decade. Take a trip down memory lane below.

MORE: The biggest albums of every year since 1956

1980 was a hugely successful year for ABBA. They started the year at Number 1 with Greatest Hits Volume 2, and their studio album Super Trouper was the year's best-selling album. It also spawned the two chart-topping singles The Winner Takes It All, and the title track. To top it all off Super Trouper was the year's Christmas Number 1 album and spent more weeks ruling the Official Albums Chart than any other album in 1980.

1981 saw huge Number 1 albums from the likes of Phil Collins, The Human League and The Police, but it was Adam & The Ants who dominated. Their second album Kings of the Wild Frontier shifted the most copies that year, spent 12 weeks at Number 1 and spawned three UK Top 5 singles.

The year also saw the release of Queen's Greatest Hits. Spending a respectable four consecutive weeks at Number 1, the album would go on to become the UK's best-selling of all time.

The Human League kicked off the year by returning to Number 1 after they captured 1981's Christmas Number 1 single Don't You Want Me. Barbra Streisand picked up the year's biggest album with nine-week chart-topper Love Songs.

However when it comes to longevity, The Kids From Fame ruled the roost for 12 non-consecutive weeks with their self-titled album, and as the famous Irene Cara song from the accompanying Fame film goes, those kids are "gonna live forever" in chart history.

Unbelievably debuting at only Number 29 on the Official Albums Chart in November 1982, it wasn't long before Michael Jackson's Thriller took the world by storm with its second single Billie Jean and third single Beat It. Thriller is the seventh best-selling album of all-time in the UK, reaching sales of 4.4 million.

Bob Marley & The Wailers' greatest hits Legend spent a whopping 12 weeks at Number 1 in 1984, and has gone on to become the album with the second-most weeks ever accumulated in the Official Albums Chart, with over 900 logged in the Top 100.

And while Legend's tenure at the top was long, it wasn't 1984's biggest album. Sales wise Lionel Richie came out on top with Can't Slow Down. The two-week chart-topper features the Top 10 singles All Night Long (All Night), Running with the Night and Number 1 smash Hello.

Before they had their own chart, multiple artist compilations were allowed on the Official Albums Chart, and they were all the rage in 1985, with The Hits Album 2 spending six weeks at Number 1, and NOW That's What I Call Music! 5 tallying five weeks on top.

Close behind them with four weeks at Number 1 was Dire Straits' Brothers in Arms. It topped the charts in April and returned to the top in August, making it a mainstay seller for much of the year. Its success ran into 1986 too, when it spent even more time at the top - 10 weeks from January through March.

1985 also saw seminal albums from the likes of Kate Bush and Bruce Springsteen reach the helm of the Official Albums Chart.

The classic stop-motion music video for Peter Gabriel's Sledgehammer was *everywhere* in 1986, resulting in his most successful album So topping the chart for two weeks.

The best-seller of the year was Madonna's True Blue, her third album that saw Madonna shoot into the realms of superstardom that her previous album Like A Virgin had cemented. True Blue spent six weeks leading the pack and spawned three Number 1 singles Papa Don't Preach, True Blue and Isla Bonita.

1987 saw Whitney Houston come into her own, with her self-titled spending six weeks at Number 1. Featuring classics like chart topper I Wanna Dance With Somebody (Who Loves Me) and So Emotional, how could it not?!

How to top Thriller was surely a dilemma for Michael Jackson, and in some ways he did so with Bad. Much like Thriller, it was a best-selling release of the year, and while his previous set spent longer at Number 1, Bad produced more Top 10 hits than its predecessor, and is one of just eight studio albums to feature seven or more UK Top 10 singles.

Kylie Minogue arrived on the scene and she did so in style, bagging 1988's best-selling album with her six-week Number 1 Kylie, which featured the four Top 2 singles. Over 30 years on, Kylie has had a chart-topping album in each of the last four decades.

MORE: The acts with the most Number 1s on the UK's Official Albums Chart

The longest-reigning Number 1 of the year was Terence Trent D'arby's debut album Introducing the Hardline According To... which logged eight weeks in pole position in 1988, and had also managed one week at the helm the previous year.

In the 1980s, there was no Kylie Minogue without Jason Donovan! Neighbours co-star Jason's debut album Ten Good Reasons featured a trio of UK Number 1 singles and was the best-seller of 1989.

Cuban-American singer Gloria Estefan spent six weeks at Number 1 with Cuts Both Ways, the most of any artist that year.