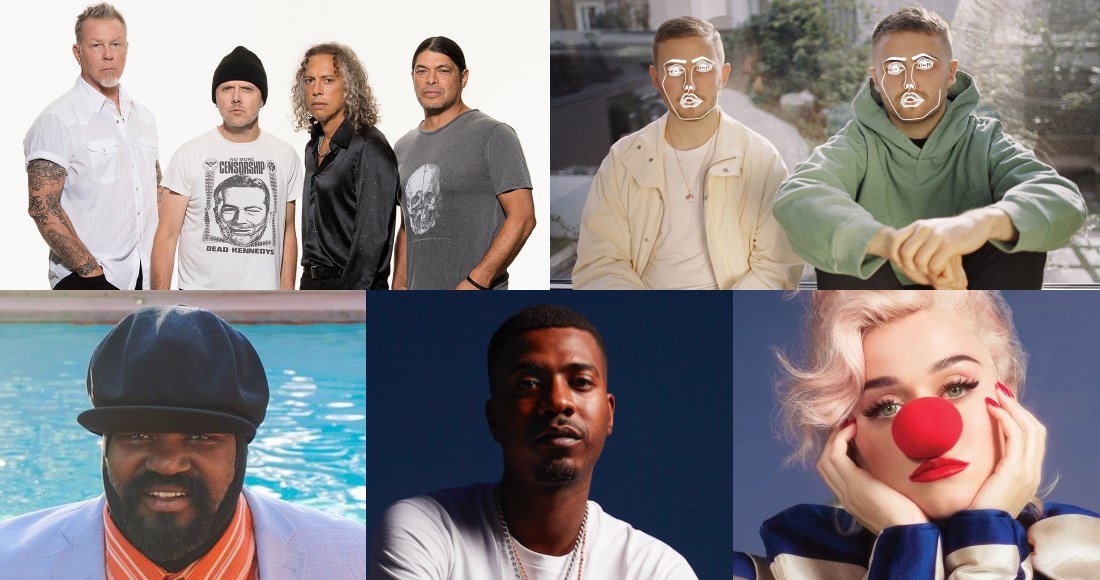 An all-new Top 5 are battling for the Number 1 spot on this Friday’s Official Albums Chart.

Just 3,000 chart sales separate the five new entries on today’s post-Bank Holiday Official Chart Update, meaning that the Number 1 could be anyone’s for the taking.

Metallica lead the way currently with their live album S&M2, the week’s best seller on physical formats so far. The US heavy metal group could score their first UK Number 1 since 2008’s Death Magnetic and fourth in total with the collection, out in-front by just shy of 2,000 chart sales.

The Bank Holiday’s most downloaded album is All Rise by Gregory Porter, in at Number 2 midweek. The jazz singer could be on for a personal best with his sixth studio album; his last LP Nat King Cole & Me topped out at Number 3.

London hip hop artist Nines is at Number 3 with Crabs In A Bucket. Far and away the most streamed album of the week so far, Nines’ third studio album is on course to be his third consecutive Top 5 entry. Also looking to make it three Top 5s in a row are electronic duo Disclosure with their third LP Energy at Number 4; brothers Guy and Howard reached Number 1 with their first two albums Settle (2013) and Caracal (2015).

Rounding out the midweek Top 5 is Katy Perry with her fifth album Smile. The US popstar is currently at Number 5 and heading for her fourth consecutive Top 10 collection. Also in pursuit of a Top 10 slot are US rock band Pvris with their album Use Me at Number 10.

Brighton indie quartet The Magic Gang are on the cusp of a second Top 20 album with Death of the Party at 11, ahead of two Record Store Day releases by David Bowie – live album I’m Only Dancing (The Soul Tour ’74) at 19, and ChangesNowBowie at 20.

Hits collection The Essential could give Status Quo their 43rd Top 40 album (21), while keyboardist Rick Wakeman’s The Red Planet could make its Top 40 debut after its physical release (26). Other albums vying for Top 40 placings are Emerson Lake & Palmer’s The Ulimate Collection (32) and Gold by glam-pop group Smokie (33).