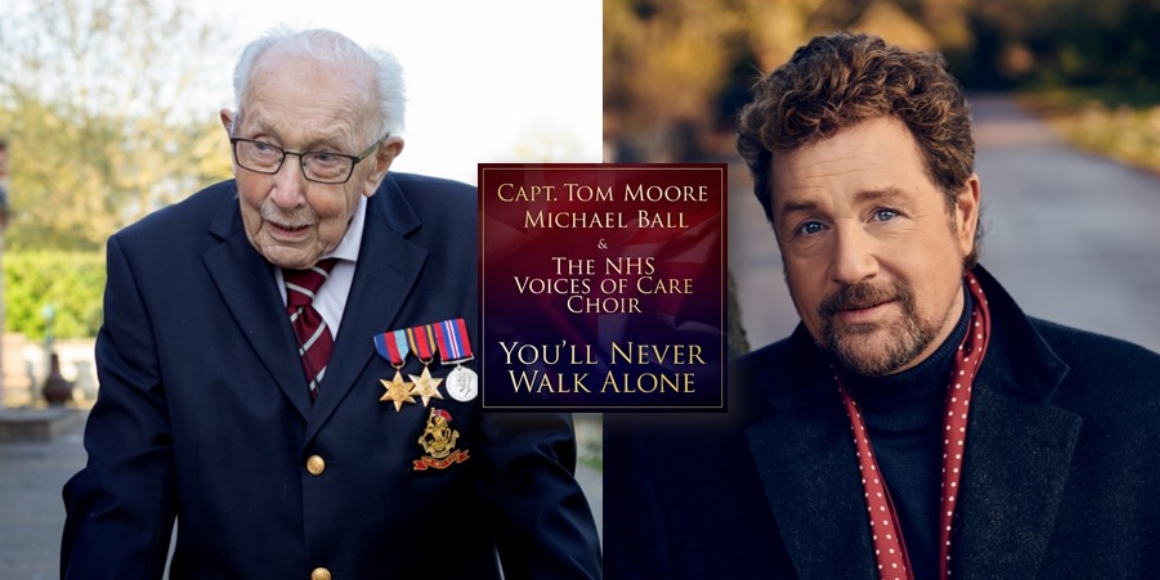 99 year-old war veteran Captain Tom Moore who is currently capturing the nation’s hearts raising money for the NHS by walking lengths of his garden, has not only raised over £25m in recent days, but is now potentially on his way to an Official UK Number 1 single too, according to new Official Charts Company data.

Captain Tom Moore has joined forces with Michael Ball and the NHS Voices Of Care Choir on a cover of the Rodgers & Hammerstein / Gerry & The Pacemakers’ hit You’ll Never Walk Alone.

You’ll Never Walk Alone gets off to a flying start in this week’s Official Chart race, the highest new entry in pole position after 48 hours with just shy of 36,000 copies sold (predominantly downloads). Captain Tom’s debut single takes an early lead of 22,000 chart sales ahead of reigning Number 1, The Weeknd’s Blinding Lights (2).

While there is all still to play for in this week’s chart race, and The Weeknd expected to close the gap on the streaming front as the week progresses, if Captain Tom does maintain this early momentum through to Friday’s final whistle, he could be bringing home a debut Official UK Number 1 single just in time for his 100th birthday on 30 April.

Captain Tom Moore pictured above with daughter Hannah Ingram-Moore at his home in Bedfordshire speaking to Michael Ball on BBC Breakfast (16 April).

100% of Captain Tom, Michael Ball and Decca Records’ proceeds from the single will be donated to NHS Charities Together to support the incredible NHS staff and volunteers caring for COVID-19 patients (Charity Registration No. 1186569). Click here to donate to Captain Tom's cause.

A Top 10 debut could be on the cards for 25 year-old Britain’s Got Talent contestant and paediatric nurse Beth Porch. Her audition performance, a moving original song called You Taught Me What Love Is, starts out as the second highest new entry of the week at Number 4. Beth, who recently recovered from coronavirus, works on the frontline in the fight against Covid-19 at Great Ormond Street Children's Hospital, London, where she caught a glimpse of her audition while on a break during her nightshift last night.

Proceeds from the single will be split equally between NHS Charities Together and Great Ormond Street Hospital Children’s Charity.

Sam Smith & Demi Lovato’s I’m Ready kicks off its chart journey at Number 11 this week. The track is taken from Sam’s forthcoming third studio album which is being renamed and postponed to later this year due to the Covid-19 pandemic.